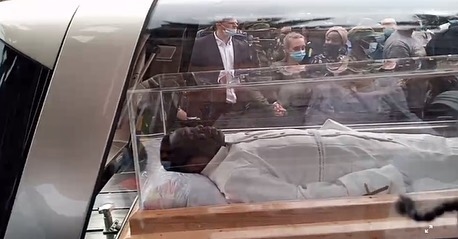 Remains of the late founder and senior prophet of the Synagogue Church of All Nation; Prophet T.B Joshua has arrived at the premises of the church amidst an outpouring of emotions and grieve. It was an emotional moment when the transparent coffin was wheeled into the church podium at the service. this is to enable people to see the Man of God’s remains before it is finally lowered to mother earth tomorrow.

Talented Thespian, Deyemi Okanlawon Speaks About His Depths And Shades In The Latest Digital Of Simple Magazine