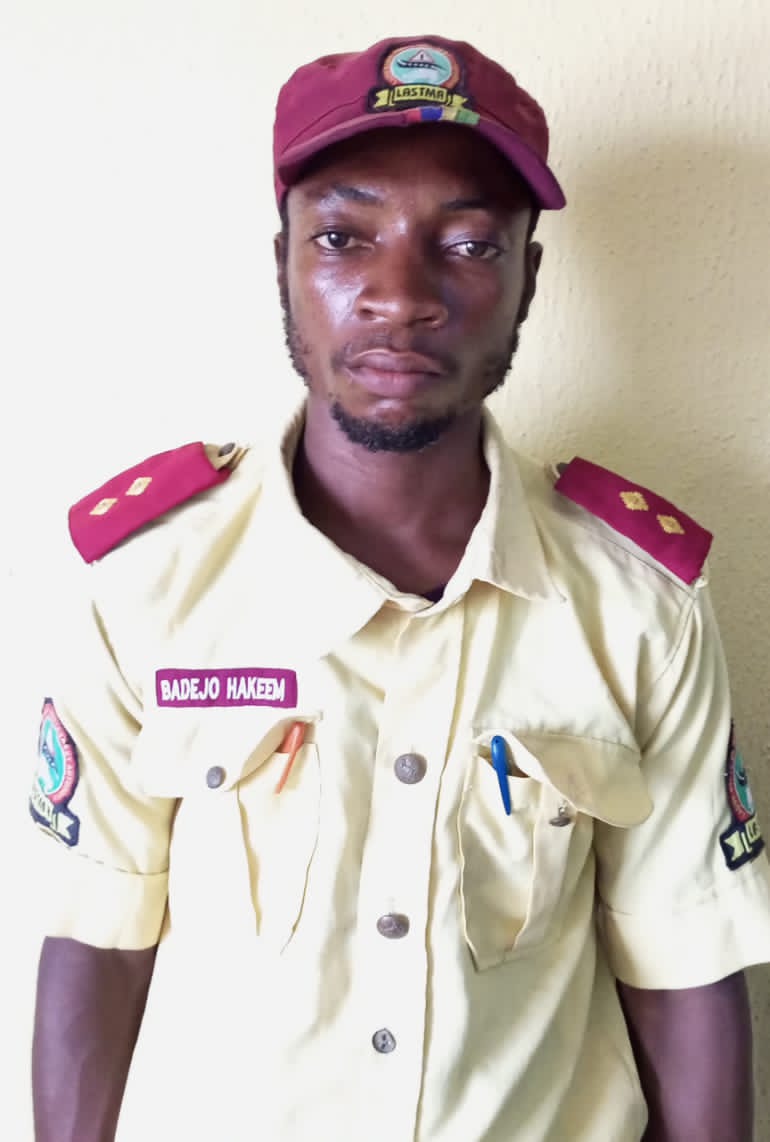 uniform and other kits

……launches manhunt for others in the act.

Operatives of the Lagos State Traffic Management Authority (LASTMA) on Wednesday, 14th of December, 2022 nabbed a fake Lastma traffic officer around the Lekki area of Lagos.

In a press statement released by the Director, Public Affairs Department of LASTMA Mr. Adebayo Taofiq quoted the General Manager Mr. Bolaji Oreagba confirmed that the suspect was nabbed by a Lastma patrol team while on duty monitoring and controlling traffic around the Lekki axis.

Priliminary investigations conducted by the Agency revealed that the arrested suspect belonged to a criminal gang and they have been extorting huge sum of money from innocent motorists apprehended for various traffic offences ranging from seat-belt, obstructions, illegal over-taking and One-way at different locations across the State.

According to Mr. Oreagba “the suspect was apprehended after our patrol team sighted him fully kitted with a Lastma uniform on a black jean collecting money from different commercial bus drivers who were illegally dropping and picking passengers under the Lekki bridge”

Mr.Oreagba urged motorists to be wary of fake officers demanding money from them stating that the Agency operates a cashless policy as any violators apprehended are charged to court with a ‘Referral Notice’

He however warned those impersonators to desist from such illegal acts as more surveillance personnel have been deployed to strategic locations to hunt for those extorting innocent motorists under the pretext of the Agency.

The arrested suspect Mr. David Oluchkwu (27yrs) confessed to having been impersonating as a Lastma official and extorting money from different motorists particularly commercial bus drivers apprehended for violating traffic laws across the State.

Mr. Oluchkwu who hailed from ‘Ukpu’ in Anambra State confessed further to be making an average of N40,000 everyday from the illegal traffic business.

“Any motorists I caught driving against traffic (One-way) paid a minimum of N50,000 while other traffic violators were charged with different fines”

The suspect with no any fixed address however appealed to the government to temper justice with mercy.

Meanwhile, the Director, Legal Department (Lastma) Barr. Akerele Kehinde disclosed that the arrested suspect would be charged to court today (Thursday, 15th of December, 2022) in accordance with the Criminal Code Law of Lagos State.