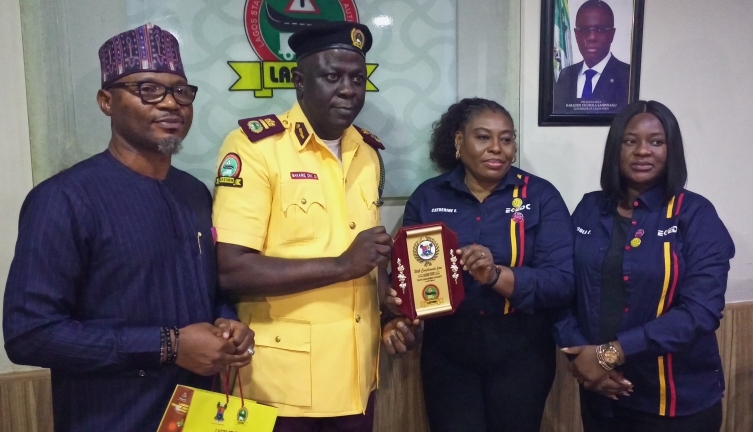 The Lagos State Traffic Management Authority (LASTMA) has warned officials of the Eko Electricity Distribution Company (EKEDC) to adhere strictly to all traffic laws and regulations while on duties across the State.

The General Manager of LASTMA, Mr. Bolaji Oreagba gave the warning today at Oshodi while receiving 500 operational reflective jackets donated to the Agency by EKEDC.

He said: “In as much as we sincerely want to appreciate your gesture for identifying with us through the donations of these operational reflective jackets, we must equally bring to your notice the need to caution some of your drivers to adhere to traffic regulations on our roads”.

“It was observed that some of your drivers, while on official duties, indiscriminately park on our roads thereby causing major obstructions to other roads users”, Oreagba stated.

The General Manager, however, called on other private organisations across the State to emulate the kind gesture of EKEDC and support the state government in its traffic management and control efforts.

According to Mr. Sanda: “Customer service is an integral part of our existence as a company since we work towards absolute customer satisfaction. Hence, recognising the paramount role of Lagos State Traffic Management Authority (LASTMA) in its effective management and transformation of an organised traffic system on major roads in the State”.

The Chief Executive Officer also commended the Lagos State Government for the establishment of an institution like LASTMA for effectively managing and controlling traffic across the State.

In attendance at the meeting were all Comptrollers and Top Principal Officers of the Agency.

CEMENT FACTORY CLOSURE: WE GAVE DANGOTE MANY OPPORTUNITIES TO RESPOND TO PETITIONS AGAINST ITS OPERATIONS BUT THEY REFUSED, UNTIL THE PETITIONERS WENT TO THE STATE ASSEMBLY – YAHAYA BELLO