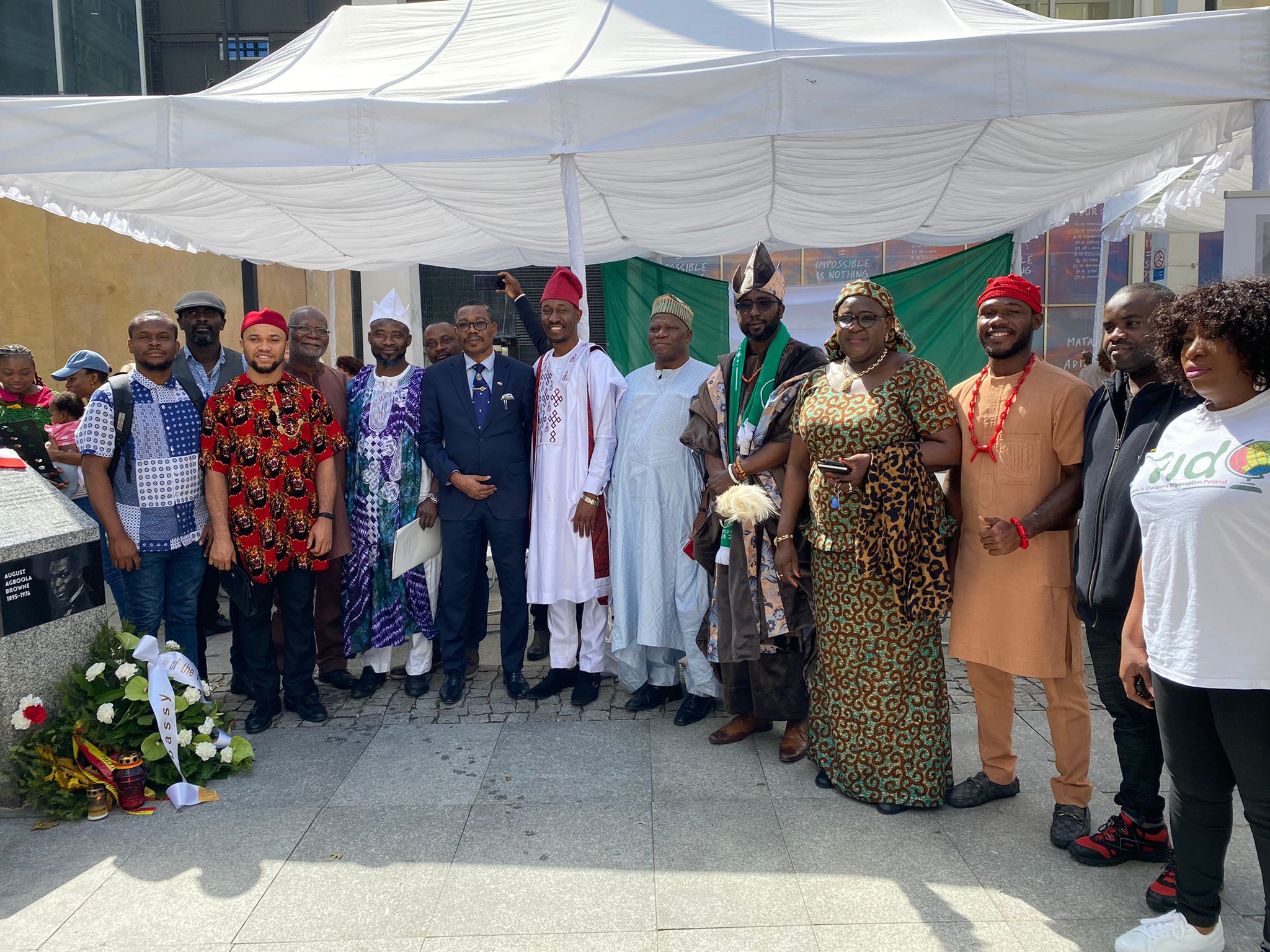 Nigerians living in Poland, on Monday, gathered to celebrate the heroic exploit of August Agboola Brown during the invasion of Warsaw by the Adolf Hitler-controlled Nazi German soldiers between 1939-1944. August Agboola Brown, according to history, was the only African descent and a Nigerian who fought on the side of the Resistance Army of Poland with the codename “Ali” during the World War II to put the German soldiers in check. About 200,000 Polish were said to have perished in this brutal uprising.

Leading Nigerians to join Poland to mark the 78 years anniversary of the World War II in Warsaw on Monday, Dr. Lateef Erinfolami from the Nigerian Professionals in Diaspora Organization, Poland (NPIDOP) and the Chairman, Local Organising Committee of the programme said that the event was an opportunity to salute the sacrifice and bravery of Mr. Agboola Augustus Brown while also paying tribute to all the heroes and victims of the Warsaw uprising.

Thanking the Polish government for allowing the construction of a cenotaph for the late war veteran as well as commemoration of his heroic feats every first day of August when Warsaw Uprising anniversary is marked, Dr Erinfolami said the government of Poland should further immortalise Agboola by naming streets around Poland in his name and establishing a Science and Art Foundation
for young Africans in his remembrance.

Dr Erinfolami said “we the Nigerian diasporan in Poland appreciate all the people and Historians who brought to us the life and history of Agboola Brown and his heroic contribution to the Warsaw uprising.

“We thank the “Freedom and Peace Foundation” and the City of Warsaw under the presidency of Mr. Rafal
Trzaskowski for the recognition of Mr. Agboola which has made our commemoration possible today.

“In the name of all African association and African residents in Warsaw and Poland in general we say your fight is our fight, your Hero is our Hero just as we enjoy the comfort and welcoming friendship of the polish people.

“Today, as we commemorate the sacrifice and bravery of Mr. Agboola Augustus Brown, we pay tribute, by bending our heads, to all the heroes of Warsaw Uprising, both the anonymous ones and those remembered in historical documents, we pay tribute to the memories of the heroes and victims of World War II and the victims of Nazi genocide.

“Additionally, we recognize the multitude of African men and women who are making their mark daily to promote the good image of their mother nation and the adopted Land of Poland. We recognize you for your sacrifices and dedication”.

Mr. Agboola was said to have been born in Lagos, today Nigeria on 22nd July 1895 to Father Mr. Wallie and Mother Jozefina daughter of John who is believed to be of Polish origin.

However, much is said not to be known of Agboola’s Polish lineage as it still couldn’t be proved and this is even said to be contrary to how he was referred to in the press after his marriage as an authentic black man marrying an authentic white woman. It is generally safe to say Agboola was an authentic African man from today Nigeria.

Agboola after his secondary education was said to have joined his grandparents on the farm but later opted for adventure to the new world on a merchant ship as a Sailor.

In England, he was said to have joined a touring Jazz group, playing around Europe from where he later landed in Poland in 1922.

From several publications and archival records; Mr. Brown lived at Złota Street in Warsaw. He was a professional Jazzman and worked in clubs. His first album was recorded in 1928 which was historic as he was possibly the first African musician to have achieve this in Europe at that time.

Agboola reportedly got married in Krakow to a Polish woman in person of Ms Zofia Pykówna, they had two sons – Ryszard (Richard) in 1928 and Aleksandra (Alexandra) in 1929. His friends and neighbors were said to have remembered him as a very intelligent, courteous person, and a polyglot (he spoke six languages).

Unfortunately, in 1939 Poland became the first victim of Nazi declaration of War on Europe. Warsaw was occupied, Agboola was said to have volunteered to use his knowledge and insight within the city as an asset in the ranks of the resistance Polish Home Army, the biggest partisan force in World War II.

Since every resistance soldier is referred by his/her Alias, Agboola Brown chose the nickname “ALI” and he daringly toiled, defending the city of Warsaw alongside the brave men and women of the Polish Home Army (Armia Krajowa) notwithstanding the ruthless Nazi German occupation force until its final hour.

Among the memories, one can also find the testimony of Jan Radecki code-name
“Czarny”, who confirms that he saw “Ali” “at the command post at 74 Marszałkowska Street,
and fought together with him, shoulder to shoulder, in August 1944 “. (the end of quote)

The end of struggle came, when Hitler ordered the annihilation of Warsaw, killing over 200 000 people with total destruction of Warsaw infrastructures and buildings. Fortunately, Agboola survived the war.

Although, there is said to be little reliable information on his life after the war. It was reported that he worked in the Department of Culture and Art of the City of Warsaw around 1949.

It was also learnt that he played an episodic role in 1953 Polish propaganda movie “Żołnierz Wolności”
(„Soldier of Victory”) about the life of communist general Karol “Walter” Świerczewski.

Agboola later emigrated to United Kingdom in 1958. There he lived anonymously for almost two decades and passed away 8th September 1976.