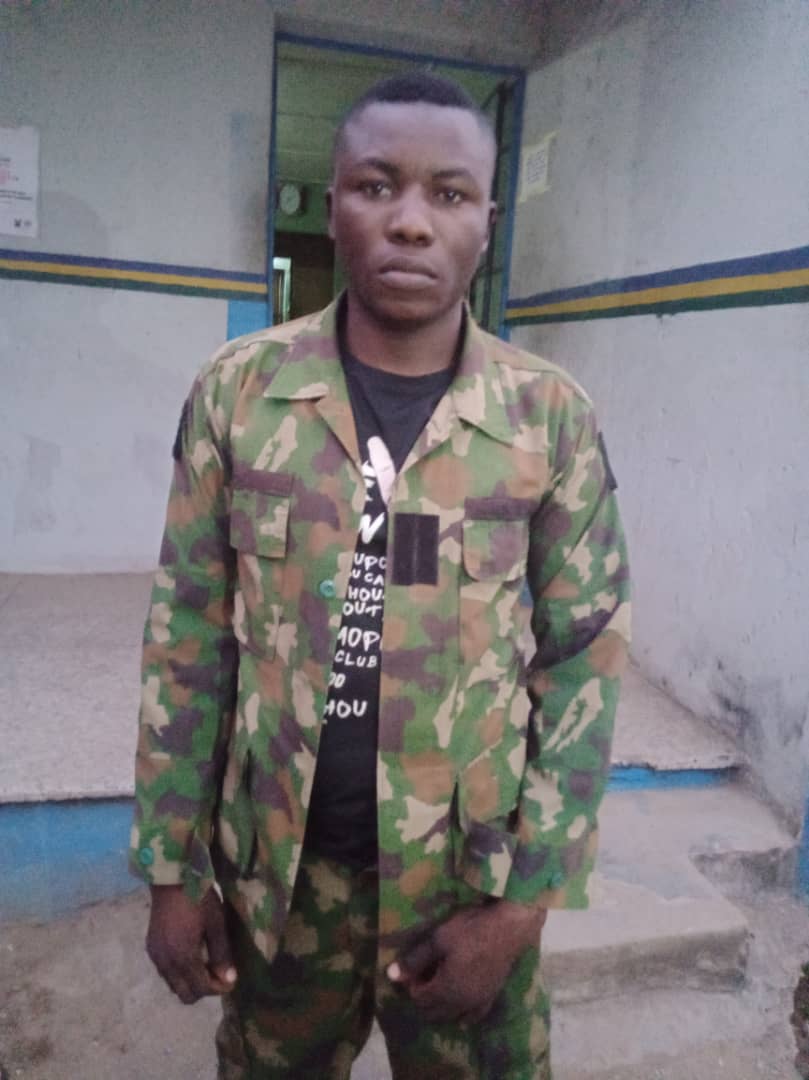 The Lagos State Police Command on Sunday 21/2/21 at about 22:51pm arrested one Johnson Godday, M, in the Nigerian Army Uniform, for attacking and robbing some commuters in Ogudu Area of Lagos State. Onyebuchi Nwanga ‘m’ of No. 24, Bayo Oshinowo Street, Ogudu, Lagos reported that at about 2215pm of Sunday 21st February, 2021, while alighting from a tricycle with his friends at Emmanuel street junction, they suddenly noticed two men, on motorcycle, in military uniform, who attacked them and snatched his Infinix smart 5 phone.
He further stated that when they raised an alarm, the policemen attached to Ogudu Division on duty around the scene came to their rescue and arrested the suspect in Army uniform while the other, also in the Nigerian Army uniform, escaped with the motorcyclist. The snatched phone was immediately recovered from the suspect.

In the course of police investigation, Johnson Godday, from Edo State, confessed that he was attached to NA 149 Batallion, Ojo, Lagos before he was dismissed from the Nigerian Army.
In another development, one pickpocket who was arrested by the men of Rapid Response Squad (RRS),  has disclosed that he has stolen over 240 mobile phones from Lagos commuters.
The pickpocket, Ayomide Sikiru, 27, a resident of Akala, Mushin, was arrested around 10:00 p.m. after he successfully picked a Tecno Camon 12 from the hand bag of an elderly woman when she was trying to board a commercial bus to Ojodu-Berger, Lagos.
The suspect, after stealing the phone, tried to alight from the bus but was restrained by a passenger who challenged him to return the phone he stole. He denied stealing any phone until RRS officers stationed at Iyana Oworo searched and recovered the phone along with an iphone 7 and another mobile phone from his bag. The owners of the phones had been contacted immediately.
Sikiru disclosed that he has been in the business of pickpocketing for a year and two months after learning the illegal “business” in 15 days from one Sakiru. He also confessed that he operates only on Thursdays, Fridays and Saturdays.
The RRS operatives in compliance with the order of the Commissioner of Police, Lagos State,  CP Hakeem Odumosu on enforcement of the curfew and COVID-19 protocols, impounded nine (9) vehicles in Agege. The nine vehicles were impounded by the Commander, Rapid Response squad (RRS), CSP Olayinka Egbeyemi, who was also in Agege at early hours of Friday 19th February, 2021, to engage community stakeholders on the security situation in Agege area.
The impounded vehicles included six (6) danfo, a Toyota Hilux, Honda Accord and Ford pickup.

Their registration numbers are: GGE 240 XZ, SMK 696 YA, AAA 869 YD, LSD 322 GE, KTU 466 FH, JJJ 877 YC, AAA 773 XH, EPE 241 XZ and an unregistered Volkswagen transporter.
The Commissioner of Police, Lagos State, CP Hakeem Odumosu, has ordered the cases to be transferred to the State Criminal Investigation Department, Panti, Yaba, for proper investigation, while the owners of the impounded vehicles be immediately charged to the mobile courts at Taskforce office Oshodi. CP Hakeem Odumosu however vowed to remain resolute in fighting against crimes and criminality in the state.
Related Topics:Adebayo OsinowoAgegeCurfewHakeem OdumosyInfinixLagos StateNigerian ArmyOguduOlayinka EgbeyemiOnyebuchi NwangaOshodiPantiPoliceRobberRRSYaba
Up Next 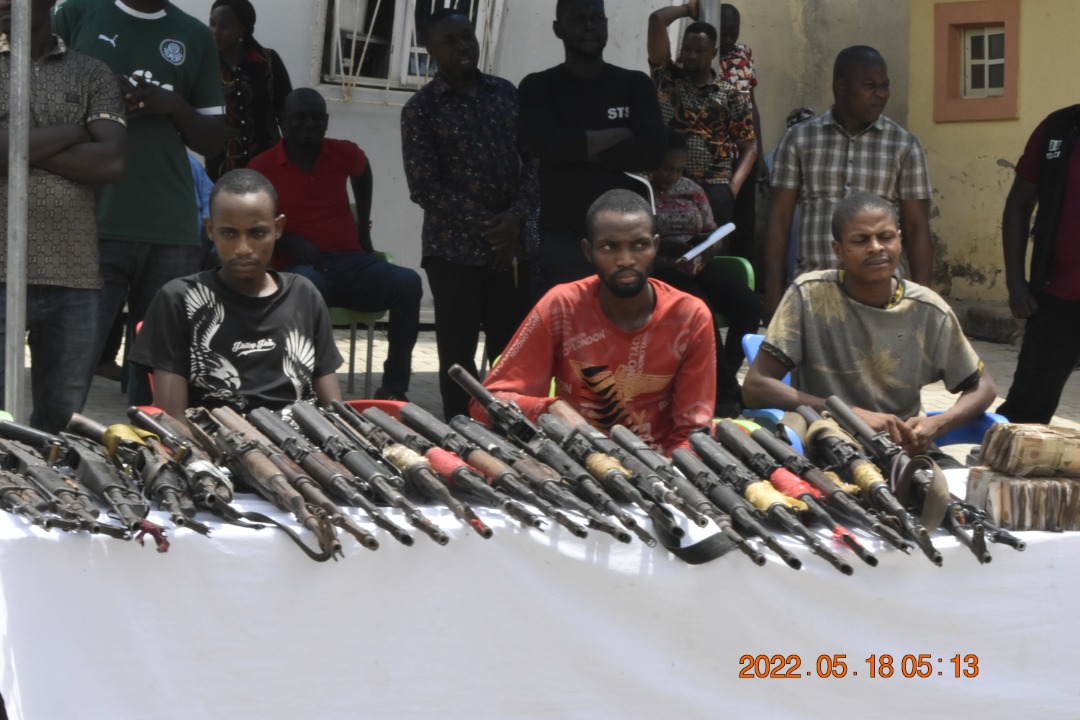 The Force Intelligence Bureau Special Tactical Squad (FIB-STS) operatives following directives from the Inspector-General of Police, IGP Usman Alkali Baba, psc(+), NPM, fdc, to clampdown on the perpetrators of crimes and criminality, as well as cutting off their supply of arms, have successfully effected the arrest of 31 suspects connected with major violent crimes including Kidnapping, Culpable Homicide, Rape, Unlawful Possession of Firearms etc.

The FIB-STS equally recovered a total of 61 firearms including 41 AK rifles, 8 Type 06 rifles, 4 Light Assault Rifles (LAR), 4 pump action guns, 2 locally made firearms, 1 G3 rifle, 1 dane gun, 376 rounds of live ammunition of different calibres, and a cash sum of two million Naira, from the suspects in the course of investigations.

Prominent among the cases include a case of kidnapping where the duo of Aminu Lawal (aka Kano), and Murtala Dawu (aka Mugala), both working in synergy with the kidnap kingpin known as Yellow Ashana, confessed to the kidnap and murder of two police officers and one vigilante in 2021. They equally confessed to the kidnap of students from the Greenfield University in Kaduna State, and the mindless murder of five victims before the payment of ransom, and the eventual release of the others. Intelligence shows that their area of operations includes Dan Hunu, Kekebi, Dan Busha Rido, Maraban Rido, and Kumi Sata, all in Kaduna State. FIB-STS operatives caught up with them in March 2022, after being on their trail upon the mention of their names in connection to the kidnapping of Bethel Baptist School students in 2021.

Similarly, a five-man trans-border syndicate that carries out kidnapping operations between Adamawa State in Nigeria, and Burha, Fituha, and Kesu in Cameroun were arrested. The gang comprises Abubakar Mohammed aged 28 years old, Shehu Mohammed aged 38 years old, Abdullahi Ali aged 30 years old, Abubakar Ali, aged 18 years old, and Hussaini Sule aged 18 years old, all males from Mubi, Adamawa State, targets wealthy individuals who possess beautiful houses or cars. They confessed to the kidnap and multiple rapes of a newly wedded woman at Askira Uba Local Government Area of Borno state whom they released upon receipt of a million Naira ransom. They were apprehended by operatives of the FIB-STS after collecting a ransom sum of 2 million Naira for one Alhaji Moni of Buladega Village on the 11th of May, 2022.

Operatives of the FIB-STS equally apprehended the duo of Umar Muhammed aged 40 years old from Mitchika in Adamawa State, and Musa Buba aged 29 years old from Hong in Adamawa State, who are famous for their kidnapping activities. They were arrested at the market, upon credible intelligence that they would be there to buy food items for their kidnap victims. They confessed to many heinous crimes including the killing and beheading of one Alhaji Mai Gome, even after ransom payment had been made.

The Inspector-General of Police, IGP Usman Alkali Baba, psc (+), NPM, fdc, while commending the FIB-STS operatives for the successes recorded, assured that all criminal elements will be smoked out of their hiding places and would answer to their crimes in due course.

All the suspects will be arraigned in court on the completion of investigations.

Hon Rotimi Balogun, PDP Aspirant Representing Ikorodu constituency vying to run for Lagos state/Federal House of Assembly. Hon Ambassador Rotimi Olatunbosun, Hon. Adesada Wasiu Akingbade and Hon Ambassador Prince Yommy Ogungbe have all been endorsed by kindness Guild of Nigeria in conjunction with the organization for good Governance headed by cgc Dr yomi otukoya. These followed their leadership quality and being members of the organization.

Dr Balogun on his part Remarked That he feels good enlighted for him to have been endorsed and also thank those who endorsed him as an Ambassador because he is a man of the people who Loves to support people in need. He further stressed that if he wins the seat and gets to serve the masses, he would love to bring in wealth as he wants people to live above what is obtainable now due to the economic situation in the country He says he will enact laws to ensure that common man on the street is okay.
Ambassador Ogungbe on his part is also an aspirant under PDP vying for National House of Representatives Assembly in Lagos West and Hon. Adesada Wasiu Akingbade from Epe Constituency vying for Lagos state House of Assembly was honoured by the kindness Guild of Nigeria in Association with Organization for good Governance, GCG (Dr) Yomi Otukoyatukoya in a statement emphasized that the certificate of endorsement as Ambassador was a timely one being a member of the organization.in his remark, Hon Ogungbe expressed gratitude to the organization and promised to do more. He says the endorsement is good, something I looked forward to on June 9 2022 we are going to distribute gifts to our people. We want to empower them and show that we care for them. We will do more if elected