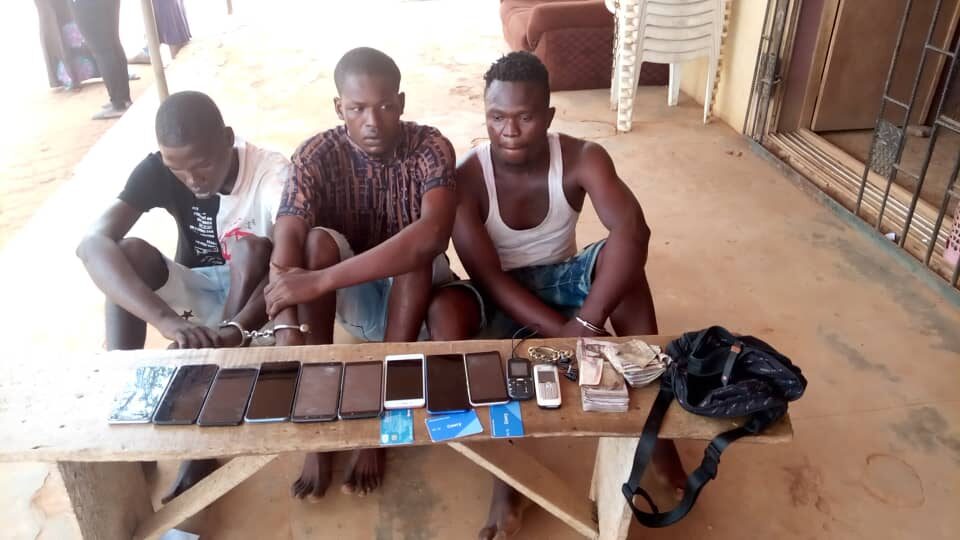 In its bid to consistently tackle crimes and criminality in Lagos State, the operatives attached to Ikorodu Division of the command have arrested three (3) suspected traffic robbers including their receiver, recovered stolen phones, on 26th March, 2021 at 1130pm by Ikorodu Round About.

The combined team of policemen and local Vigilante men on patrol sighted the suspects at the Ikorodu Round About while allegedly robbing innocent commuters and passers-by in the area, and were arrested.

The suspects are Lucky Isibor, m, 34, Isah Mohammed, m, 26 and Aminu Abdullahi, m, 21. Items recovered from them include eleven (11) phones, One Hundred and Thirty-Nine Thousand (#139,000), BRT Cowry Card, black bag containing assorted charms and weeds suspected to be Indian hemp. During interrogation, it was discovered that Lucky Isibor doubles as a receiver to traffic robbers in the area.

In addition, the same operatives at Ikorodu Division on 25th March 2021, at about 6.50 pm, arrested Emmanuel James,m, of No 27, Hassan Street, Rofo, Odongunyan, Ikorodu. The police interrogated him and he confessed to being a member of Aye Confraternity.

In another development, the operatives attached to the Mushin Division of the Lagos State Police Command on 25th March, 2021, at about 5.30pm, arrested two (2) suspected armed robbers who have been terrorizing ITI Ladipo Main Market, 5 Star, Daleko Areas.

The suspects were arrested while the police were responding to a call from the market men, who had been victims of their various operations, at Ladipo market.

The suspects are Nnamaka Udeh, m, and Obina Onovo, m. Items recovered from them include one Samsung 57, which is being identified by one of their victims, pairs of shoes, bags containing ATM cards and charms.

The Commissioner of Police, Lagos State, CP Hakeem Odumosu, has commended the efforts of the policemen and the vigilante men for the arrests. He has ordered that the suspects be transferred to the State Criminal Investigation Department, Panti, Yaba for proper investigation and possible prosecution.

While assuring Lagosians of adequate security of lives and property in the state, CP Hakeem Odumosu vowed to make Lagos State uncomfortable for criminals.